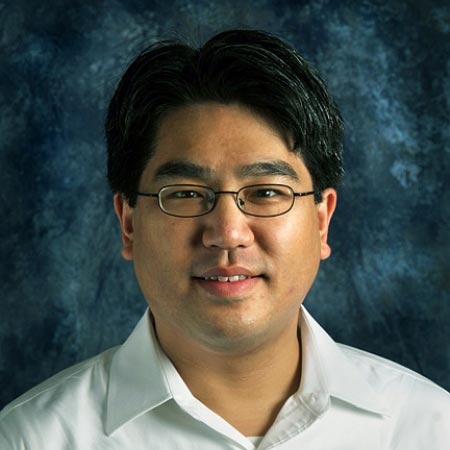 PNGC would like to congratulate Edward Lee, MD, Ph.D., Associate Professor of Pathology and Laboratory Medicine in the Perelman School of Medicine at the University of Pennsylvania and a practicing neuropathologist in the Division of Neuropathology on earning tenure!

Dr. Lee has been at Penn since 1997, where he did his MD/Ph.D. from 1997 to 2005. He did his Ph.D. dissertation with Virginia Man-Yee Lee, Ph.D. working on beta-amyloid. Afterward, he did his residency in pathology, a fellowship in neuropathology, and a two-year post-doctoral fellowship. Dr. Lee eventually became faculty in 2011 and currently leads the Translational Neuropathology Research Laboratory (TNRLab), which is interested in the molecular mechanisms that lead to the formation of inclusions or aggregates and neurodegenerative disease. Diseases like Frontal Temporal Dementia (FTD), Amyotrophic Lateral Sclerosis (ALS), Alzheimer’s disease, and Trauma-Related Neurodegeneration (TReND). Dr. Lee is also a co-leader of the NIH-supported Penn Neurodegenerative disease brain bank, which began in 1985 by John Trojanowski. The brain bank has almost 2,000 different cases—people who were affected by neurodegenerative diseases and control.

In recent news, Dr. Lee led a team of Penn Medicine researchers who have discovered a new and rare genetic form of dementia. After examining the brain tissue of a deceased donor with an unknown neurodegenerative disease, Dr. Lee and his team found something that they’ve never seen before, as well as a mutation that’s never been described before.

To learn what was causing the disease, Dr. Lee and his team studied the Valosin-containing protein (VCP) gene. Vivianna M. Van Deerlin, MD, Ph.D., who runs the genetics for the neurodegenerative disease center, found a variant in VCP. The gene is responsible for breaking apart the build-up of tau proteins. However, the genetic mutation impairs that ability and causes the build-up of tau aggregates.

“The tangles looked exactly like what we see in Alzheimer’s disease. There are different isoforms of the tau protein, and the same isoforms were building up in Vacuolar Tauopathy (VT) compared to Alzheimer’s Disease, said Dr. Lee.” When we purified the tau aggregate and looked at it with an electron microscope, we saw the same paired helical filament structure. The inclusions looked very much like Alzheimer’s Disease.”

These findings suggest possibly a new way to treat neurodegenerative diseases like Alzheimer’s disease and other causes of dementia.

For more information, the research was published in Science magazine.